Husband and wife duo Jami and Kim Hinman of Hinman Construction and their team took on an 19th century Greek Revival home. The project started out as a homeowner DIY but became a complete and transformative makeover. The remodel consisted of the kitchen, mudroom, entry, laundry, sitting area, and two bathrooms.

“We love working with clients who are open to ideas and suggestions, excited about the prospect of a remodel,” Kim shares. “I love the idea of making what is old new again.”

In a remodel, costs can add up quickly with labor that one does not see, which is heat, plumbing and electrical work. “The home was not built with any of that in mind. Floor vents in the middle of the kitchen floor were rerouted, heat to the second floor had to be rerouted, and the second-floor bathroom had a major leak,” Kim notes. 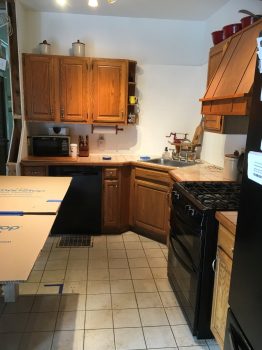 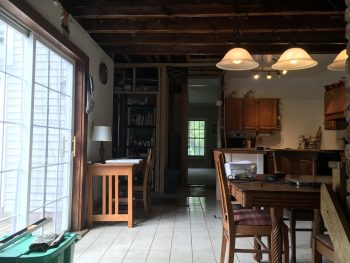 The kitchen was small and dated, and provided little storage. The kitchen was large enough to accommodate an island but did not have one in the existing floorplan. 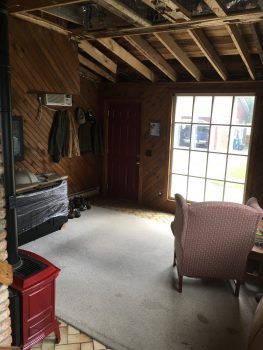 The paneling in the mudroom/breakfast nook made the space feel dark, despite the large window. 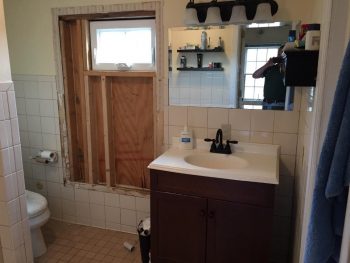 The very dated bathroom was small with one poorly placed sink and minimal natural light. 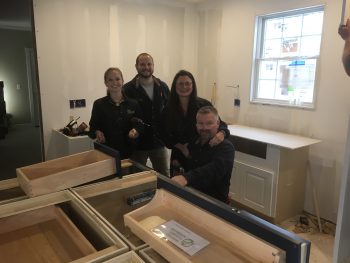 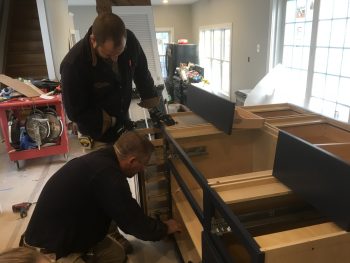 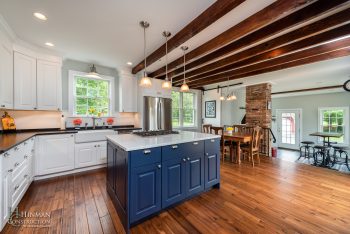 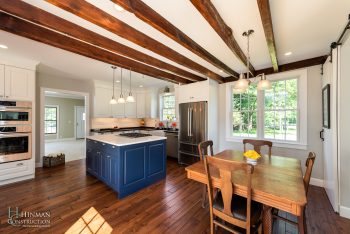 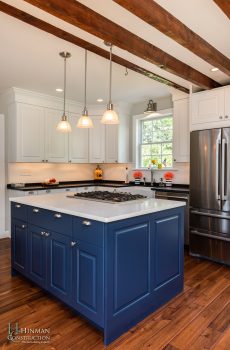 “The view to the outside was opened just enough to capture the essence and beauty of the property with the addition of new doors and windows. The support beams pictured were original to the house. Each was unique and required detail and careful install to incorporate into the new kitchen design. The kitchen was made in Modern Overlay construction with the Jackson J door style in Glacier (perimeter) and Nebula (island) paints. The kitchen houses many of Greenfield’s most popular storage offerings, such as a tall pantry pull-out, knife insert and pull-out trash. 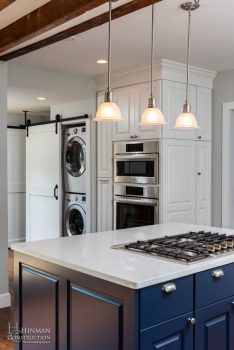 The custom barn doors allow easy access to a stackable washer/dryer unit, just off the kitchen. “We made all the barn doors and tracks,” Kim comments. “Swing doors would have taken up too much space.” 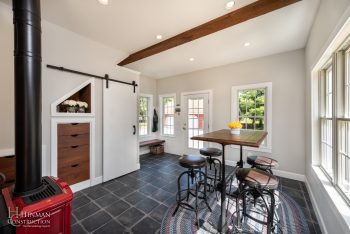 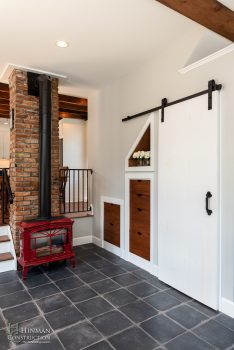 Greenfield made the custom roll-out unit under the stairs to exact specifications. This added extra storage for serve ware and place settings for the breakfast room area. The maple boxes were stained in Federal and all fronts were scooped for easy access. Additional windows were added to make the space light and bright. 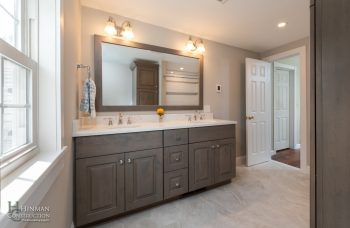 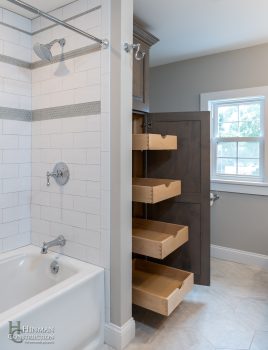 The bathroom was once a single vanity and now has a double sink vanity with a large linen closet with roll out shelving. It was made in Modern Overlay construction, with the Jackson J door style in Alder stained in Asphalt.

“For me, this project was a labor of love. We worked as a team, owner, designers, builder and as friends,” Kim says.”The homeowner now has bright and clean spaces that flow together nicely.”

“We enjoyed bringing this 19th century home into the 21st century,” Jami notes.